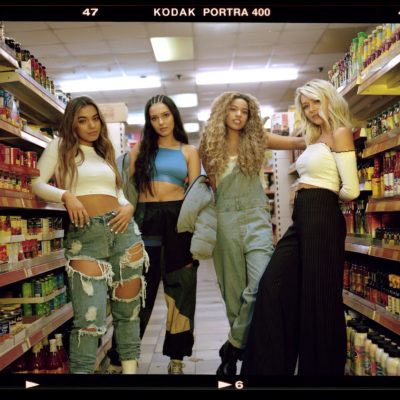 The message Four of Diamonds are sending out is important in the current climate of pop, culture, the world. Empowering, unique and fun – not to mention talented – the four girls, Caroline Alvares, Yasmin Broom, Lauren Rammell and Sophia Saffarian, are doing something that is a step a way from the usual pop sphere. The first all girl band to be signed to Virgin since the ‪Spice Girls, the four bring vibrant positivity and a modern agenda of woke-ness to their music.

Their first single, Name On It, chronicles just this, a very shared experience of someone not wanting to commit to a relationship. “I feel like every girl has experienced that or will at some point,” says Lauren of the title. The song is super empowering, stating what happens when someone just isn’t that into you, ('Can't be seen in daylight and you won't do date nights, anyone would think you're ashamed but it won't make me cry,') and offering a level of acceptance. “Value yourself, if he doesn’t want you, he’s not worth it. Someone else does want you,” says Yasmin. “It’s important to be powerful,” she continues, “We have a responsibility really, anyone who has a platform does. Our song is about standing up for yourself.” It’s an important message at a time that could not be more complex. The single is dynamic and energetic, with vibrant hand claps and bold pop hooks. And it’s no wonder: the girls have been in the studio with some of the moment names, from ‪Dua Lipa’s Caroline Ailin, to ‪Ed Drewett (Jonas Blue), as well as  Freedo (‪Zara Larsson), ‪Cutfather (Little Mix, ‪Pussycat Dolls), Grades (Khalid), Tre Jean-Marie ( Mabel) and Jin Jin (‪Jess Glynne). As well as working with this incredible pool of talent, Jonas Blue, the multi-million selling artist/producer and 2018 BRIT award nominee has come on board to executive produce their debut album.