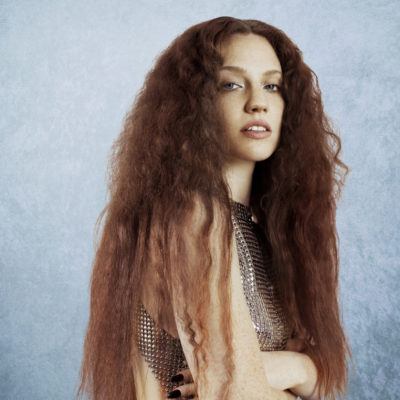 ‘I always used to think that you’re nobody until somebody loves you,’ says Jess Glynne, singer, star, voice of the street. In her first few years in the music industry, Jess has carved out a unique slot all of her own. Where others were contemplating the aftermath of heartache, she was always about standing on your own two feet.

When she looks at the statistics that have marked her sky-rocketing career so far, there is a look of mild disbelief on the face of Jess Glynne, as if this might have happened to someone else. I Cry When I Laugh is one of the defining British pop records of its era. At the time of writing it has been a chart staple for 138 weeks. It debuted at number one, spawning 12million worldwide singles sales, 39 weeks on the UK top 10, 2.5billion Spotify streams, a sold out UK arena tour, Brit, MTV: EMA, Ivor Novello, MOBO, Q and Glamour award nominations.

These are the facts. Underneath is Jess’s peerless ability to commune with an audience through song; to tell the truths young women want to hear about their concerns, the loves that build them up and let them down; the aspirations and dreams that might turn sour but you’ll smile through them anyway. From the beautiful, pared back, gospel inflected uplift of debut cut I’ll Be There, it is clear that Jess is ready to build on the momentous footwork put in on her first foray into fame.

‘I don’t write songs because I want a hit,’ she says. ‘I never have and I never will. I want to make a great album, that’s it.’ In the event, she is delighted with first choice, I’ll Be There, a spare, thoughtful showcase for her instantly familiar, rousing vocal styling, every bit the introductory calling card Hold My Hand was back in 2015, at the beginning of Jess’s incredible pop life.

Jess Glynne has found peace through music, once more. ‘I’m in a great place now,’ she says. ‘I felt like I was in between a normal life and a famous life, this or that relationship, and it’s felt at times like I was lost.’ With age, comes understanding. Over the last couple of years Jess has learned one of life’s vital lessons and put it all back into her second record. ‘It wasn’t that I was lost, at all. It was about learning to love myself.’