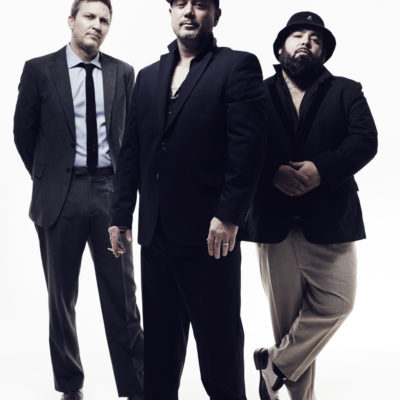 They are, still, the world’s finest and only purveyors of cinematic hip hop, rock ‘n’ roll, blues-jazz, latino soul vibes.  The planet’s best-loved “cousins from New York” who, through the mid-late 90s, chronicled life in their native city while bending the global ear to the sonic possibilities of exuberant hip-hop gangster-rock merged with lounge music, funk, mariachi trumpets and 'Bass-o-matic' Barry White.  While possibly smoking a cheroot, in a sweat-dripped Puerto Rican nightclub, somewhere on the Lower East Side.  Like The Killers and Kings of Leon today, the UK loved them first, the most; whip-smart story-tellers in smarter Saville Row suits, who told vibrant, satirical, comically tall tales of living large in the neon metropolis via music, drugs, crime and existential ennui.  With a penchant for a beautiful “lady”.

FLC released the albums 'Welcome To Poppy's' in 2003 and 'Livin' In The City' in 2005. The last studio album released was 'Classic Fantastic' in 2010. 2011 saw the release of their triple live album 'Fun, Live, and Criminal'. The band released a live concert film titled 'The Bong Remains The Same' in 2014 featuring 26 live songs from a performance at Shepherds Bush Empire in London on their 2010 Classic Fantastic tour. September, 2015 will mark the 20th anniversary of the bands first ever live shows at The Tunnel nightclub in New York City. A world tour is currently being setup to celebrate 20 years of FLC.