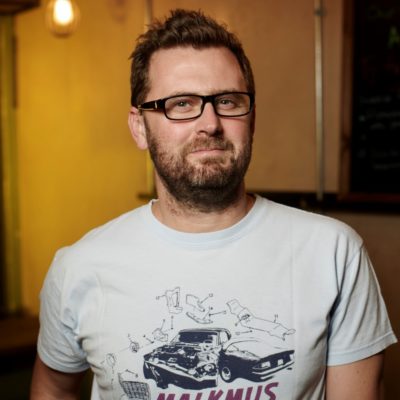 Hallsworth was born and raised in Collie, Western Australia. As a teenager Scott was an avid cross country runner and twice raced at national events where his highest placing was 6th. He also competed at state level track and field events and won silver medals for both 800m and 1500m events. Influenced by his brothers Craig and Gary who were in Perth-based bands in the 1980s The Bamboos and Healers, Hallsworth formed several small garage bands while in high school.

Scott left high school when he was 16 to take up an offer of an apprenticeship with ex-La Gavroche sous chef Alain Doisneau. As an apprentice, Scott went on to compete in cooking competitions, during which his achievements included a Gold medal 3rd year apprentice at the Western Australian state competition which lead to inclusion on the Western Australian State cooking team. At national level, Hallsworth won Gold for his pastry and a Bronze award for his buffet work.

Post-apprenticeship, Hallsworth moved to Perth where he worked for the Hyatt Hotel and the popular 44 King Street Brasserie. Following a 6-week road trip around Australia, Hallsworth decided to stay and work at Hayman Island Resort, situated on the Great Barrier Reef in North Queensland.

In 2013, Hallsworth created, devised and opened the Kurobuta concept.