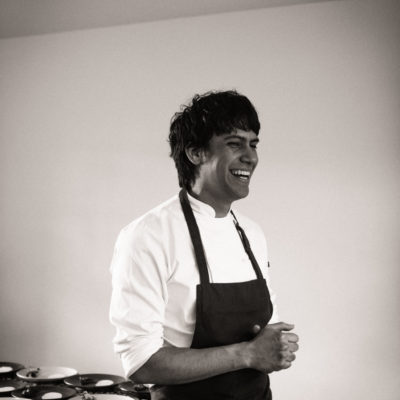 Santiago Lastra is a Mexican chef with a passion for combining his native customs with local ingredients. Bringing a sense of Mexican celebration to his cuisine, Santiago merges traditional recipes from his homeland with regional produce to create vibrant, flavoursome dishes.

For the past two years Santiago has been travelling the globe, taking up guest chef invitations at high profile establishments including London’s Tate Modern and Carousel, Hija de Sanchez in Copenhagen, Meteri in Italy and Neolokal in Istanbul. His reputation preceding him, he was also invited to return to his homeland to launch NOMA Mexico in 2017 as project manager and Rene Redzepi’s right-hand man; sourcing exceptional ingredients from unassuming small-scale producers across the country. Following this, he decided to move to London where he has been dedicating his time to culinary research trips around the UK, and gathering inspiration for his debut restaurant KOL.

Deeply tied to his roots, Santiago began his professional career in Mexico City at the tender age of 15. With dreams of travelling the world since childhood, it was after graduating from high school that Santiago first satisfied his wanderlust and travelled to Spain, where he took a job at one Michelin-star restaurant Europa in Pamplona, and worked there for two years. Inspired by the world of fine-dining, at the age of 19, Santiago returned home to attend the Coronado Institute culinary school in Mexico City. Following this he returned to Spain and spent 15 months working at Mugaritz, outside of San Sebastian – considered one of the best restaurants in the world, according to the World’s 50 Best.

One of Santiago’s greatest dreams was to work at Rene Redzepi’s NOMA, so at the age of 24 he bought a one-way ticket to Copenhagen and worked in many of the city’s restaurants. Santiago was offered a position working on culinary research projects at Copenhagen’s prestigious Nordic Food Lab, titled ‘the secret of the tortilla’, creating tortillas with local Scandinavian grains. Santiago was recognised as one of San Pellegrino’s top ten young Scandinavian chefs of 2015, representing Denmark.

For the following two years, Santiago spent his time traveling and cooking in some of the best kitchens across the globe, in a total of 24 countries – to include France, Italy, Taiwan, Georgia and Turkey - and which earnt Santiago the nickname The Nomadic Chef. Over the years Santiago has also hosted guest chef residencies and pop-ups at restaurants and festivals including Mume* Taipei, Postrivoro and Wooding in Italy and Taste of London.

NOMA Mexico opened its doors in early 2017 for a total of six weeks, throughout which time Santiago successfully sourced every supplier. The experience allowed Santiago to explore and understand Mexico’s cuisine in ways he’d never done before.

Santiago's breadth of international experience, gradually inspired him to conceptualise a restaurant of his own; and London was the destination he desired to open it in. He was captivated by the breadth of quality produce available in the UK, London’s multicultural influences and its air of creativity and innovation.

‘Col’, adapted by Santiago to read Kol, means cabbage in Mexican Spanish and represents Santiago’s belief that the simplest things can be made extraordinary if you believe in them. Kol will put the welfare of people and the planet at the core, by treating staff and producers fairly and celebrating authentic Mexican craftsmanship.