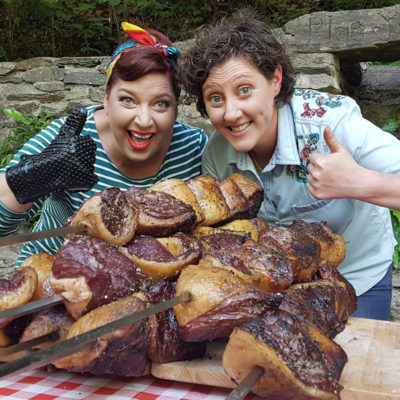 Back in 2012 Sam and Shauna made the decision to quit their long-standing careers in London to hit the road on an epic journey across America to discover the secrets of American barbecue. Six months later having learnt all the secrets of the BBQ trade they returned to the UK ready to share all they discovered and to chase their dream of living the American lifestyle back home.

They started with a tiny pop up at the back of a Cardiff Pub and after a few years of hard work and BBQ madness they had won the coveted ‘Best Street Food’ award at the BBC Radio 4 Food and farming awards for their barbecue. In 2016 they were finally able to open the doors to their first permanent restaurant in the heart of Barry Docks, Hangfire Southern Kitchen. Late in 2018 they won the Observer Food Monthly restaurant of the year award.

Sam and Shauna are regulars on the talking scene. With 6 months’ worth of tales to tell from their adventures across America to the challenging years that followed where they found themselves becoming pop up queens to having an award-winning restaurant, book and television show. Sam and Shauna are the ultimate candidate’s for ‘an evening with’ after dinner speech, or if you want to get practical a top notch bbq demonstration.