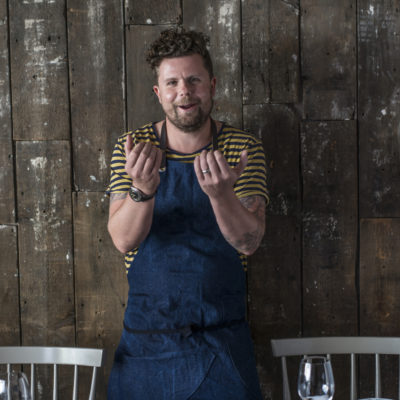 Chef Robin Gill’s early career took him from his home town of Dublin to Marco Pierre White’s three-Michelin-starred, The Oak Room in London. He ventured to Italy to work at two-Michelin-starred Don Alfonso 1890 on the Amalfi Coast, a restaurant with its own farm. From Italy back to the UK, when a two week placement at the infamous Le Manoir aux Quat’ Saisons alongside Raymond Blanc turned into a four year stay.

In February 2012, Robin embarked on somewhat of a culinary expedition which saw him on placement in some of the best restaurants in the world including Noma and Frantzén.  Upon his return to the UK, he stumbled upon an old ramshackle building in Clapham.  After some dubious negotiations, a few beers and with the support of his wife, Sarah, Robin took on the site in November 2012. Five months of hands-on scrubbing, sanding, painting and a lot of help from friends resulted in them opening the doors on St Patrick’s Day 2013, and thus, The Dairy was born.

The Dairy is an exciting modern bistro with a produce led menu, aiming to create a countryside farm to table feel. A back to basics approach means the team prepares almost everything in-house; churning the butter, curing the meats, smoking fish and growing herbs and vegetables in the rooftop garden. Within the first year, The Dairy received numerous awards and became a destination dining spot, drawing diners not just from across the river but from across the globe. The family of Clapham restaurants has now expanded with the addition of Counter Culture, a snack bar with just 15 seats, and Sorella, a local Italian restaurant with an approach inspired by Robin’s years spent working on the Amalfi coast. Each restaurant creates an environment that is unpretentious and accessible for all, putting the focus on cooking great food and working with passionate producers that share the same philosophy.

Robin’s ventures have received awards and recognition across the board, most notably, The Dairy reaching number nine in The National Restaurant Awards and reaching the top 50 in the Good Food Guide.  Just 3 weeks after opening, Counter Culture was awarded a coveted 5 Star review in Time Out London. The article quotes "every so often a restaurant comes along that has me reaching for a sixth star". Robin and Sarah won The Evening Standard’s Best Restauranteur Award in 2016. Robin personally received the 2016 Good Food Guide Chef of the Year award, was named amongst the OFM top 50 and has received nominations for the GQ Chef of the Year and The London Restaurant Festival. In 2018, Sorella was awarded a Bib Gourmand by Michelin and was listed in The Times 100 best UK restaurants.

Away from the restaurants, Robin has cooked at and contributed to many events including Dan Barber’s WastED, Wilderness Festival, Food on the Edge, The Big Feastival and The Big Grill in Dublin to name just a few. He has hosted guest nights at The Flitch of Bacon and Hawksmoor. Robin has also contributed recipes to many publications and in early 2016, was given the opportunity to write a weekly series of recipes and cooking tips in the Independent on Sunday. Early 2017 saw Robin as a judge on MasterChef Ireland. His first book, Larder, was published in 2018.  2019 is shaping up to be even more eventful, in May, Robin will launch his biggest site to date. Darby’s is an oyster bar, grill and bakery located in Nine Elms.