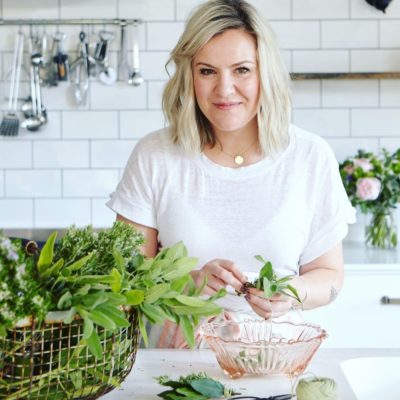 Rebecca Sullivan is a sustainable living advocate living in the Clare Valley, South Australia in a straw bale home completely off the grid on a 90 acre eco-farm. She is a self-taught cook and has worked with some of the world’s best food producers, academics, activists, and chefs. A food curator, consultant, TV presenter, activist, author, regenerative farmer and social entrepreneur having founded Australian Native wellbeing brand Warndu with her partner Damien. Their Warndu Cookbook will be released in May 2019 with Hachette. Rebecca has worked on many a projects any food lover would envy, from launching the Real Food Festival in London to being Taste Curator on Slow Food Nation in San Francisco, farming coffee in Uganda to teaching scientists in the Maldives for the United Nations.

Rebecca completed her Masters in International Rural Development, Climate Change and Sustainable Agriculture at the Royal Agricultural University in Gloucestershire, UK in 2010, during which she focused on food security and a sustainable food future. Rebecca’s obsession with food began in Italy, so it followed course that she would become interested in the Slow Food Movement in which she spent years being both Youth Ambassador in the UK organising events, campaigns and of course eating.

After a decade working overseas, she has re-settled back in Australia and has launched The Granny Skills Movement  – a community-supported movement that aims to protect the skills, heritage and traditions of our elders. As well as this she consults to organisations, running events, catering, education and strategy work in and around the food, environment and lifestyle sectors and sustainability. She teaches Natural Living and Cookery at River Cottage UK and The Agrarian Kitchen in Tasmania as well as part of the Food Entrepreneurship degree at Le Cordon Bleu Australia. Here her focus is ethical food and wine business as well as how to be a food entrepreneur.

Rebecca is an Author of seven books, ’The Art of Natural’ series were released in May 2018. Her second book, ’The Art of the Natural Home,’ came out in May 2017. 'Like Grandma Used to Make', her first book came out in April 2013 with a huge amount of great press including being listed in the top ten books for Mothers Day in The Age, The Sydney Morning Herald and Woman’s Day. Wish Magazine in The Australian has called her " A veritable modern day Mrs Beeton.” In 2012, Rebecca signed on as a presenter on Love to Share on the TEN Network in Australia, is  guest presenter on ABC Gardening Australia, has appeared regularly on Channel TEN’s The Circle and Breakfast Shows, as well as Channel Nine’s Morning and TODAY show. She is a popular presenter for her simple dishes, great advise and wonderful ideas for a simple sustainable home. Rebecca is also an OZ Harvest, BALL USA and LIFE Education SA Ambassador  and writes for SA Gardens, NITV, ABC Organic Gardener, Junkies, In the Moment Mag and Delicious to name a few.