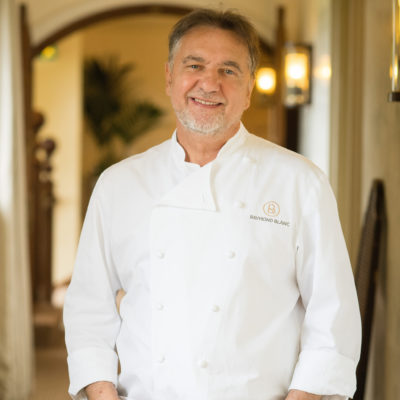 Raymond Blanc OBE is acknowledged as one of the finest chefs in the world. Completely self-taught, his significant influence on British cuisine has brought scores of awards. Born in Besançon, France, Raymond’s passion for cooking was inspired by the local terroir and the formidable Maman Blanc who used fresh, local and seasonal ingredients to create meals for the family; family meals full of goodness and love.

In 1972, Raymond arrived in Britain to work as a waiter in Oxfordshire. One day, when the cook was ill, Raymond took over the kitchen and at that moment, his career was born. At the age of 28, Raymond opened his first restaurant, Les Quat’Saisons, in Summertown, Oxford. Triumph swiftly followed.

It was in 1984, however, that Raymond fulfilled a personal vision when he opened Le Manoir aux Quat’Saisons in Great Milton, Oxfordshire. A stunning hotel and restaurant in harmony, today, Belmond Le Manoir is the only UK country house hotel to have retained two Michelin stars for the past 33 years. It is also home to the acclaimed Raymond Blanc Cookery School, welcoming keen cooking enthusiasts from around the world.

Although entirely self-taught himself, Raymond has championed and nurtured some of the country’s most respected chefs in his kitchens. Thirty-four of these chefs have gone on to win Michelin stars for themselves, including such names as Marco Pierre White, Michael Caines MBE, Ollie Dabbous and Bruno Loubet to name a few.

Raymond was also the founder of Brasserie Blanc (formerly Le Petit Blanc), a group of some 20 brasseries across England, serving great-quality French cuisine in a relaxed atmosphere and at affordable prices. An acknowledged champion of sustainability, Raymond is the President of the Sustainable Restaurant Association, a not-for-profit organisation leading the industry in becoming more sustainable.

Raymond is a best-selling author and his BBC television series have included such titles as Kew on a Plate, The Very Hungry Frenchman, Kitchen Secrets and The Restaurant. His latest book ‘Le Manoir aux Quat’Saisons: The Story of a Modern Classic' offers a truly personal tour of the legendary hotel and restaurant through the four seasons. It has been met with critical acclaim.

In 2007, Raymond was appointed an OBE by Her Majesty The Queen. In 2013, he was awarded the National Order of the Legion of Honour, the highest French decoration.