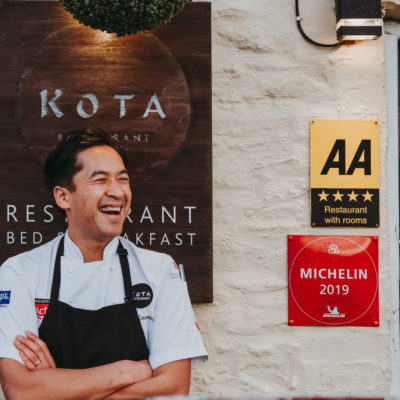 Having spent eight years working in award winning restaurants in London, he moved to Porthleven in Cornwall 14 years ago with his wife, Jane. Together they run Kota Restaurant with Rooms, and Kota Kai Bar and Kitchen.

Jude creates exciting dishes at both restaurants, combining the best from land and sea, with his signature Asian fused style. Awarded a Michelin Bib Gourmand for the fourth year in a row for ‘The Inspectors Favourite for Value’, and a coveted 3 AA Rosettes, Kota Restaurant prides itself on its love affair with fresh locally sourced ingredients and does a wonderful 7 course tasting menu alongside the a la carte menu and great value set menu.

The innovative menu includes Jude’s famous Rockpool dish, as featured on the BBC’s Great British Menu, in which he has represented the South West three times.

Jude’s other restaurant “Kota Kai” is a family style restaurant.  It has also been awarded an AA Rosette, and in addition to the fantastic food and stunning views, it serves great cocktails and mini Kai which you can enjoy in the outside seating area, kid’s room, relaxing lounge or private dining room.

Jude is often seen doing chefs demonstrations at Food Festivals and cooking with his fellow Great British Menu chefs at their restaurants for Guest Chef events.

Jude is an avid supporter of many charities, cooking and organising events all over the South West.