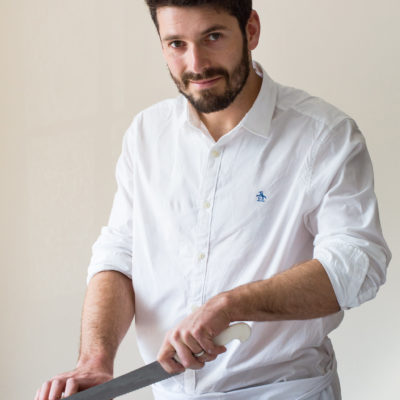 "I may be the youngest but watch this space".

Henry joined Hobbs House Bakery in his teens. He started working in the freezer and cleaning but as soon as he could drive he headed over the hills on his moped to the Nailsworth shop. It was working in the kitchen there that he developed his love of cooking and met his wife Jess. After training at Westminster college and working as a chef in London Henry came back to join his family business. Henry arrived back to set up Hobbs House Bakery Butchery, from this he quickly became retail director. It is now that he takes on his biggest challenge as Sales Director; with his bounding energy and enthusiasm for people and good food he plans to see Hobbs House Bakery grow within the market offering excellent customer service and a tasty buying experience. Henry was included in Forbes 30 under 30 and won their Judges choice with his beef and truffle sourdough donuts.

When Tom and Henry Herbert aren’t at the frontline of the bakery you may see them on the television or at events performing as their double act The Fabulous Baker Brothers.

These brothers have been bringing the ultimate bread and meat combinations to you since 2012, with a series on Channel 4 and More4. When they were growing up Henry decided that Tom had the bread thing covered and that he wouldn’t follow his path but would become a chef.

Little did he know that, after a few successful years in London, that the two brothers would end up working next door to each other, Henry as the Butcher and Tom as the Baker.