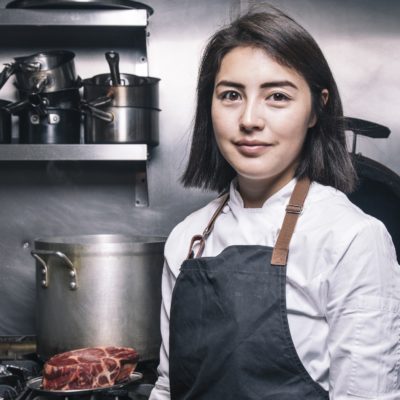 At the heart of Kaizen House is Elizabeth, an acclaimed chef who draws inspiration from her British and Singaporean heritage, as well as her home of London. Mortimer House residency will be her first 2019 venture.

Prior to Kaizen House, Elizabeth was the founding head chef at Pidgin in East London, where she guided the popular neighbourhood restaurant to a Michelin star barely a year after opening. Her dishes have been described as bold and exciting, and she fuses her Singaporean-British heritage and fine dining cooking experience with a passion for wood-fire cooking. Elizabeth originally studied architecture, but after a stint on Masterchef in 2011 she realised that cooking was her true calling. Since the show, Elizabeth has studied and worked with some of London’s top chefs such as Neil Rankin at Smokehouse and Bubbledog’s, The Kitchen Table. In 2017 Elizabeth was awarded ‘Chef to Watch’ by the National Restaurant Awards and listed in Observer Food Monthly’s ‘50 of Observer Food Monthly’s favourite things’. Elizabeth has had guest appearances on BBC’s Saturday Morning Kitchen, Masterchef UK, a Financial Times Panellist, and she was the keynote speaker for SAUCE ‘17 forum in Estonia.