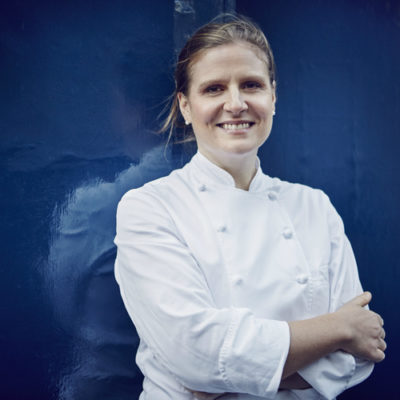 Chantelle Nicholson is the multi-award winning Chef Patron at Tredwells, in the West End’s Seven Dials, as well as Group Operations Director for Marcus Wareing Restaurants.  As one of the UK’s leading female names in the hospitality industry, Chantelle’s impressive ascent on the culinary career ladder and achievements to date, set her apart as a remarkable talent and a source of inspiration to hospitality professionals across the UK.

Originally from New Zealand, Chantelle trained as a lawyer, before discovering her passion for food. In 2004, she entered the Gordon Ramsay Scholarship competition, earning a place in the final.  There she met Josh Emett, judge and then Head Chef of The Savoy Grill by Marcus Wareing. Impressed by her skills in the competition, Josh offered her a job, which she took up without hesitation, moving from Wellington to London then and there.

Working her way up through the kitchen, Marcus Wareing quickly recognised her abilities and took her under his wing at his then restaurant, Pétrus. From Commis Chef to Senior Sous Chef in a matter of years, Chantelle was also instrumental in the operational shift towards the creation of Marcus Wareing Restaurants, earning her a coveted Acorn Award in 2009. In 2011, Chantelle opened The Gilbert Scott, as General Manager, honing her business and operational skills in this iconic location.

During the summer of 2014, Chantelle had the unique opportunity of working on set at Ealing Studios, spending three months training Bradley Cooper and Sienna Miller, along with other key characters, how to convincingly play chefs on camera, for their new film, Burnt.  As part of this, Chantelle also created all of the menus and recipes for the film, and ensured the food visually stood up to the script’s stringent requirements.

2014 then also saw Chantelle open Tredwells, the largest of the group’s restaurants. Returning to the kitchen in early 2015, Tredwells won the much sought after ‘Best New Restaurant – London’ at the 2015/16 AA Hospitality Awards. In July 2016, Chantelle’s skills were once again recognised as she won ‘Manager of the Year’ at the 2016 The Caterer and Hotelkeeper Awards (The Catey’s), swiftly followed in October 2016, by winning the prestigious ‘Woman of the Year’ at The Shine Awards, which celebrate female game changers in today’s hospitality world. Most recently, Chantelle won again at The Shine Awards, being presented with 'Chef of the Year' in October 2017.

Growing up in New Zealand,  Chantelle learnt first hand about seasonal food from a very tender age, about how things grow, and about the ecosystem of the garden.  So it’s logical that as a fully-fledged chef, her heart lies in what comes from the earth.  Driven initially by both her upbringing, and also the health benefits of both vegetables and whole grains, Chantelle is the chef who champions plant-based cooking, and ensures that there are plenty of plant-based dishes on the menu at Tredwells.  Her debut book under her own name was published by Kyle Books in April 2018.  Planted focuses on plant-based recipes that deliver on both taste and creativity, taking it to the top of the charts on Amazon on publication, hitting the number one spot in the Gourmet Food category.

Alongside her work with the restaurants, Chantelle has also co-authored five of Marcus’s cook books and has been instrumental in the expansion and growth of Marcus Wareing Restaurants, as Wareing’s business partner.

Chantelle’s contribution to hospitality in London alongside cookery books, TV appearances and film consultancy, places her in the much deserved spotlight as one to watch, and one who is making impactful waves in the industry.