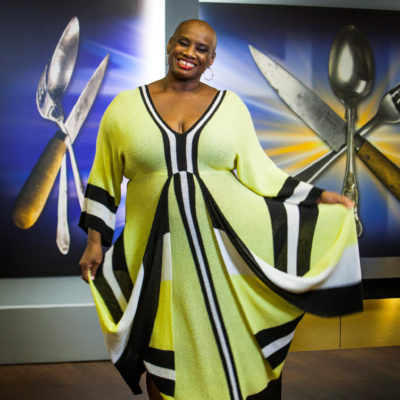 Andi Oliver has had an incredibly varied creative career starting in 1981 alongside Neneh Cherry when she fronted the band Rip Rig and Panic. Between then and now she has been part of a number of other musical influencers and is currently collaborating with producers as part of a new music collective. Andi’s on screen work began in 1993 when she took part in a pilot called Native Tongues. She then went on to host Backstage at the Brits for Initial TV and Carlton, the hit cult show Badass TV with Ice T on Channel 4, a short film for the BBC and various projects for Channel 4 such as the award winning Crazy Sexy Cool – a documentary made in association with Couch Potato Television.

Andrea’s strong and distinctive voice has been used on several documentaries and has been invited by The Brit Trust and Nordoff Robbins to host their annual Woman Of the Year Awards for 9 years in a row. She was the host of the hugely successful popular afternoon show on GLR for three years and for 8 years presented The Selector a show for The British Council that is broadcast in over 15 different countries and in 2005 with Andrea at the helm won a Silver Sony Award for best weekly music show.

Then to a mix of music and screen, Andi went on to co-host coverage for BBC at Glastonbury for several years. In 2006 she presented the much talked about ‘The Truth About Food’ for the BBC and then in in April of 2007 she and Neneh Cherry hosted a cooking series on BBC2 called ‘Neneh and Andi Dish It Up’

Andi was Creative director of The Birdcage,for two years before launching her very own kitchen at The Jackdaw and Star, a beautifully renovated pub and eaterie in the heart of Homerton. This year she has opened a new restaurant, ‘Andi’s’, and can be heard as a regular panel member alongside Jay Rayner, Angela Hartnett, and Henry Dimbleby on BBC Radio 4’s The Kitchen Cabinet.